I've made a really small version of Napkitten's Accordion Wallet before as a custom request item but, just as some people would consider the regular size wallet too big for their needs, my 'fun-sized' wallet would generally be considered too small to meet all the expectations of a day to day wallet. I thought a medium sized wallet had potential so I decided to see if I could work something out. 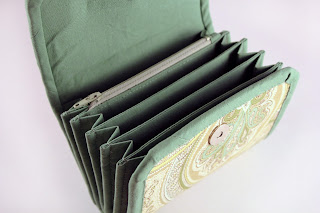 The finished measurements are 6" by 4 1/2" and when it's closed it is about 1 1/2" wide. On the inside it has the same 5 divided sections and 1 zipper pocket and the sections are still large enough to store most smartphone models. The biggest deviation on this wallet from the original is there are no card slots on the inside of the wallet(Napkitten's pattern includes 8 card slots behind the zipper pocket). 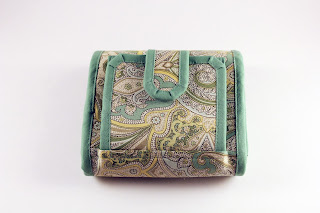 Instead, I constructed a card slot solution on the back of the wallet. It has 8 slots, 4 sewn right to the back of the wallet and 4 on the bit that opens up, and it closes securely with a magnetic snap. I thought this was a better option for the 6" wallet because I couldn't figure out a way to put card slots on the inside that wasn't awkward. 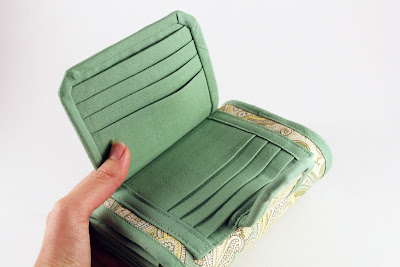 Overall I'm pleased with how the back turned out. I had my doubts during it's construction, but I think the bias tape around all the edges really help tie everything together. I seriously interfaced all the pieces to ensure when cards are being held that they are safe and secure, but as a result it might be a wee bit bulky. Maybe I'll be able to find a happy medium with my next attempt at this size. 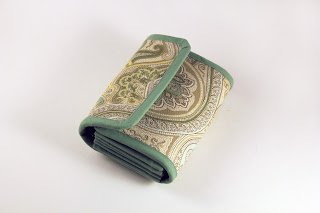 The only other thing I would change about this wallet is the front flap. If it was 1/2" - 1" longer it would lie a bit flatter when it was closed, and I think that would make it look more in line with the look of the wallets made from the original pattern. I'll be making a couple more of this style in the next week, so if I make a post of all the Christmas presents I've made this year I'll show any changes/improvements to this design.

Speaking of Christmas, I bought a couple of early presents for myself. First of all I got some Olfa 28mm Blade Refills

for my rotary cutter(from Amazon). Even though I've had a rotary cutter this whole time, I had been using scissors to cut out all my pieces because the blade was so dull it barely cut a dashed line in the fabric. I've heard people say that you don't realize you need a new blade until you replace it and see the huge difference  that it makes, but my blade very obviously wasn't doing it's job. 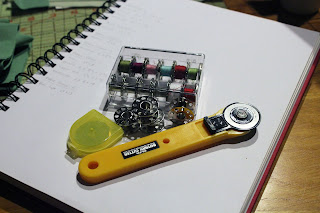 that came with 12 extra metal bobbins(from Amazon). I like matching my threads as close in color to my fabrics as I can, and as a result I end up with all my bobbins half full because I change colors so frequently. These extra empty bobbins and a clear box to keep the used ones neat and untangled was just what I needed.

Let me know what you think of this design variation of Napkitten's Accordion Wallet. What are some alternative ideas for the card slots? In this post I show a wallet with the card slots on the inside on the front flap. What other methods should I try?

Thanks for looking. And as always, comments and criticisms welcome.
at 9:44 PM